Manny Herrera was born in Houston, TX in 1992 in the neighborhood of Kashmere Gardens.

He attended Elliot ES in Denver Harbor, Hamilton MS in the Heights, and Waltrip High School in Garden Oaks/Oak Forest and graduated in 2010. He started college at the University of Houston in the fall of 2010 majoring in broadcast journalism.
He worked many jobs early in his life, clothes shop that his parents’ flea market, greeter and a child supervisor for a daycare at IKEA, then started college in 2010.
While in college, Manny worked at Costco in meat department and a baker.  Some of his other jobs include grilled cheese food truck, a truck named Coreanos and even cross-trained at the Burger Joint restaurant as kitchen manager.
Fortuitously, an old co-worker was in search of a bartender at Local Foods Restaurant. He had no bartending experience but got the job. The job was a blessing in disguise and it gave him the time to learn something new from scratch with great hours and brilliant staff.  He’s still working there, enjoys building relationships with his guests and catching up with regulars from the Tanglewood area.
Fall 2017, he started his first internship at ESPN Radio 97.5 as podcasting editor, promotions editor and learned to run the board.
A friend of a friend from Paulie’s mentioned an opening at the restaurant. Manny applied and got the job. So far, his experience at Paulie’s has been entirely welcoming and enjoyable. He especially loves cracking jokes with the back-of-the-house and working hard while having a good time with his fellow baristas.
Manny continues his education and currently learning French at school along with his studies in Broadcast Journalism.
In his free time, Manny enjoys playing the guitar, especially for strangers at the park or for his family, friends or S.O.. He hopes to record an album in the future. He also enjoys playing soccer competitively. Manny is also working on a Podcast, Carcast (a Podcast recorded while Manny drives around Houston) and a soccer podcast. He’s in a band with his brother and practices music with other Houston musicians on his rare free time.
In the future, Manny would like to coach soccer, teach guitar and perform more music in cafes, small venues and maybe one day a theater. He’d like that very much.

Although he’s a born-and-raised Texan, Hunter has only recently returned from an 8 yeah journey through the Pacific Northwest. An avid learner, and self-proclaimed nerd, Hunter is always excited to acquire and hone new skills. 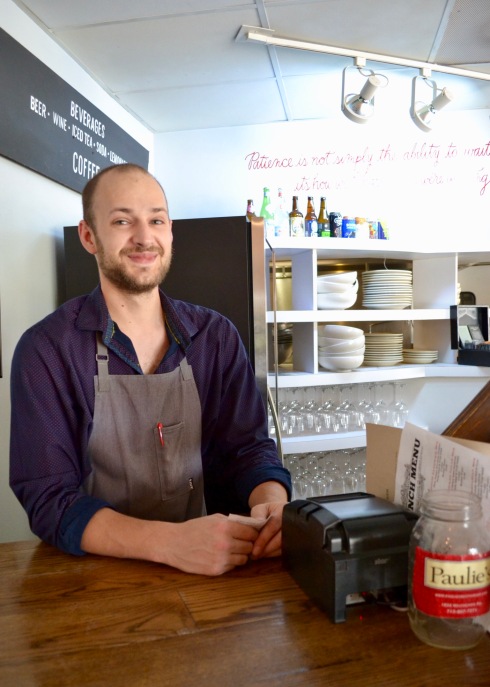 Previously, Hunter has spent several years working as a Mental Health Counselor and Treatment Coordinator for both youth and adults, in inpatient and outpatient settings. He has dabbled in more hands on positions, such as HVA/C, being a track mechanic for a Pro3 racing team (competing in both Canada and the States), and even running his own small business performing metal fabrication, automotive restoration and modifications.
A lover of craft beverages, amazing food, good music, animals, motorsports, hammocks and anything outdoors — Hunter couldn’t be more excited to be a member of the Paulie’s family!