Lindsey is a native Houstonian who is returning to Paulies.  She is a well known professional in the Houston coffee community. 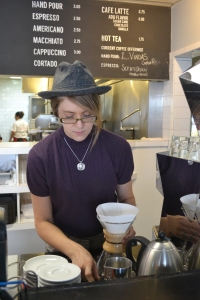 We consider Lindsey to be an OB (Original Barista). She spent her teen years in coffee shops and cafes and she was already wrapped up in the world of coffee when the third wave of craft coffees began to emerge.

While Lindsey tried the traditional route to a career, college right out of high school, she discovered quickly that this was not the path for her. She did try. She tried anthropology. She tried history. She tried journalism. She tried philosophy. Even business was just not for her. There was nothing to be passionate about and nothing to get excited about learning. Except coffee.

When Lindsey turned 18, she quickly moved out and moved to the Montrose. She wanted a change from the suburbia of Sugarland. She wanted to be in the thick of the city. She got a job at Agora and found some of her passion. It was here that she had a few customers comment on how they loved the way she made coffee. A light went on in her head. Lindsey started to ponder on the ways to make coffee better for her customers. She even had nightmares about making the cappuccino froth just right.

However it was at Taft Street Coffee that she truly began her education as a barista. It was here that she was introduced to the varieties of craft coffee and began to understand the process of picking and brewing the perfect cup of coffee.

Lindsey, the ever adventurous one, decided to make another bold move. She realized that she needed to see more of the world, to live in a place where she did not know many people, to find out what it life was like on her own terms. While California was amazing, Lindsey learned that you need to move there with a purpose. It makes daily life easier.

Back in Texas, she began working at Catalina Coffee. She was surrounded by a nice machine, a more traditional Italian menu, and a roaster. She learned latte art, proper espresso extraction, pour overs, and other methods. She was even given the opportunity to compete in barista competitions.

Lindsey was most recently roasting for Boomtown Coffee and double timing it at Paulies. Lindsey has a true passion for what she does. While Lindsey is not working, she enjoys playing with her two adorable puppies and she even blows glass.